So… i received the following message today : 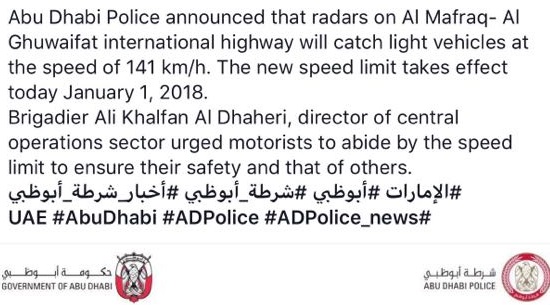 And before i shared it with you, Ruwais Community, i wanted to confirm it with :

A. I used the MOI app and had an online chat with the agent. The MOI agent imediatly confirmed it. I advise you so do the same, and also wish them a Happy New Year !
B. Tracked down the actual source of the news : @ADPoliceHQ

2. Credible news provider in the GCC :

And i found this article on Gulf News : http://gulfnews.com/news/uae/transport/abu-dhabi-police-install-speed-limit-on-this-major-route-1.2150324

So, there you have it: The Firts 2018 Good news has been confirmed.

Share this with your friends, and increase the setpoint of your cruise control accordingly.